The Best Wines to Try From Chile

Chile is known for producing wines of exceptional value, but that’s not to say Chilean wines don’t also include outstanding bottles to boast about. As a new world wine region, with 2,700 miles of coastline along the frigid Pacific Ocean, Chile produces wines that are both fruit-forward factor and herbaceous, similar to French wine. It’s no wonder then, that French wine producers from Bordeaux have invested heavily in the region, making it their home away from home.
Find out about Chile’s 7 most important wine varieties, how they taste, and what specific regions to seek out if you’re hoping to find great quality. Once you know what clues to look for on the label, you’ll consistently find great wines.
Chile’s Top Wines
1.    Cabernet Sauvignon
2.    Chardonnay
3.    Sauvignon Blanc
4.    Bordeaux Blends
5.    Carménère
6.    Syrah
7.    Pinot Noir
8.    Others of note 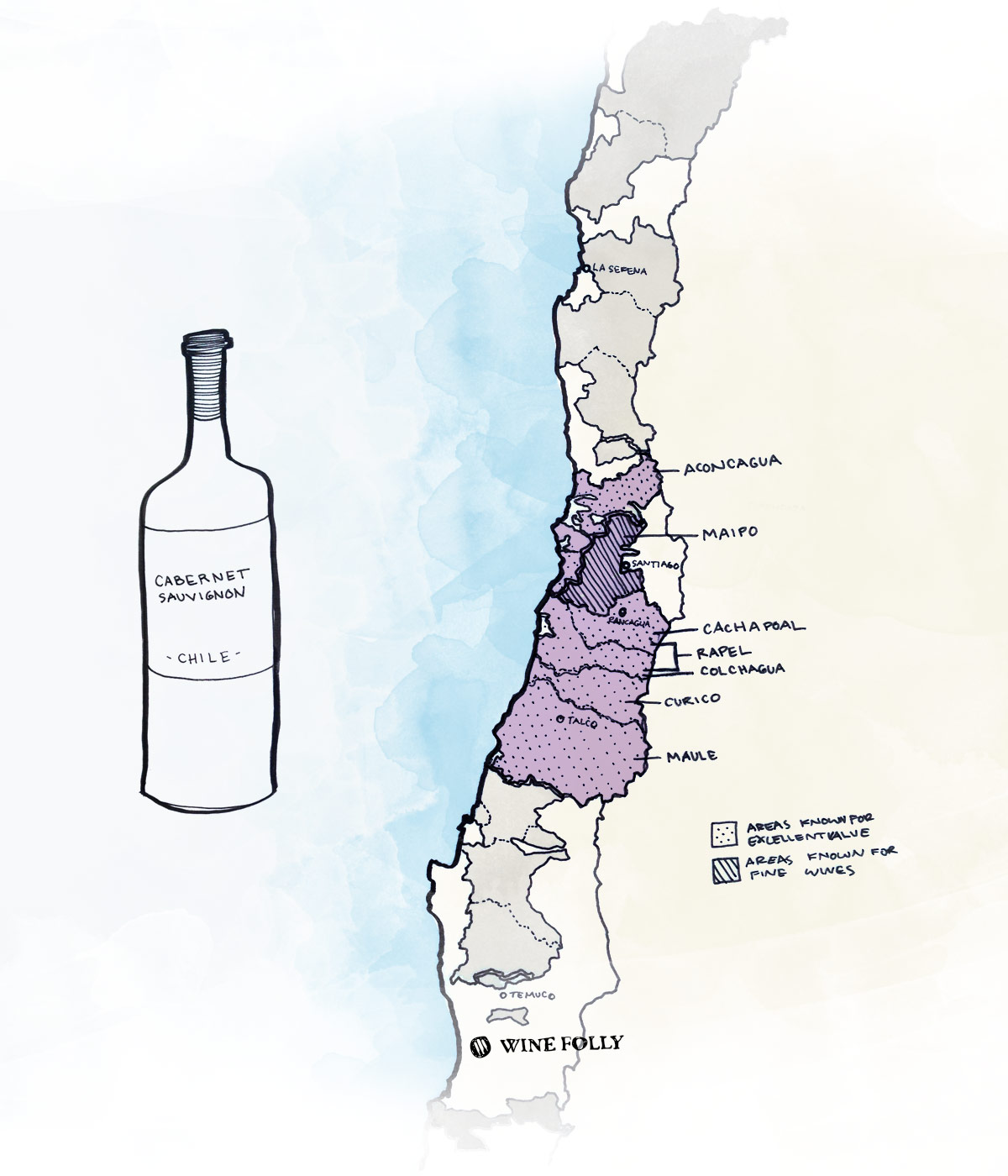 Cabernet Sauvignon
Cabernet Sauvignon is the most widely-planted grape variety in Chile. Chilean Cabernet Sauvignon typically produces a lighter colored, less tannic style of Cabernet Sauvignon, with juicy flavors of black cherry, plums, smoked bell pepper, and (on some more refined examples) mint and pencil lead.
Great Value Regions: The majority of the best value wines are labeled as Central Valley (Valle Central) wines. This vast valley actually encompasses a number of subregions, including the regions of Maipo, Colchagua, and the Maule Valley. Find a top-value Chilean Cab by seeking out the higher quality vintages, many of which are under $20.
Fine Wine Regions: The Maipo Valley is well known among experts for its bolder styles of Cabernet, outfitted with darker notes of blackberry and cocoa powder. For a more elegant, Bordeaux-styled Cabernet, Colchagua and the Rapel Valley offer wines with black fruit and pencil-lead-like minerality.
Vintages to Seek Out: 2009 and 2011–2014 all produced excellent quality reds, particularly 2009, 2011 and 2013. Keep in mind that 2015 was a hot year, so you might find these to be slightly more tannic.
Top Chilean Wine Brands
Seven major producers in Chile control over 55% of Chile’s wine. This small handful of brands includes Concha y Toro, San Pedro, Montes, Emiliana, Veramonte, Lapostolle, and Santa Rita. Still, you can find many excellent independent producers, championed by importers such as Vine Connections, which specializes in importing several independent brands. 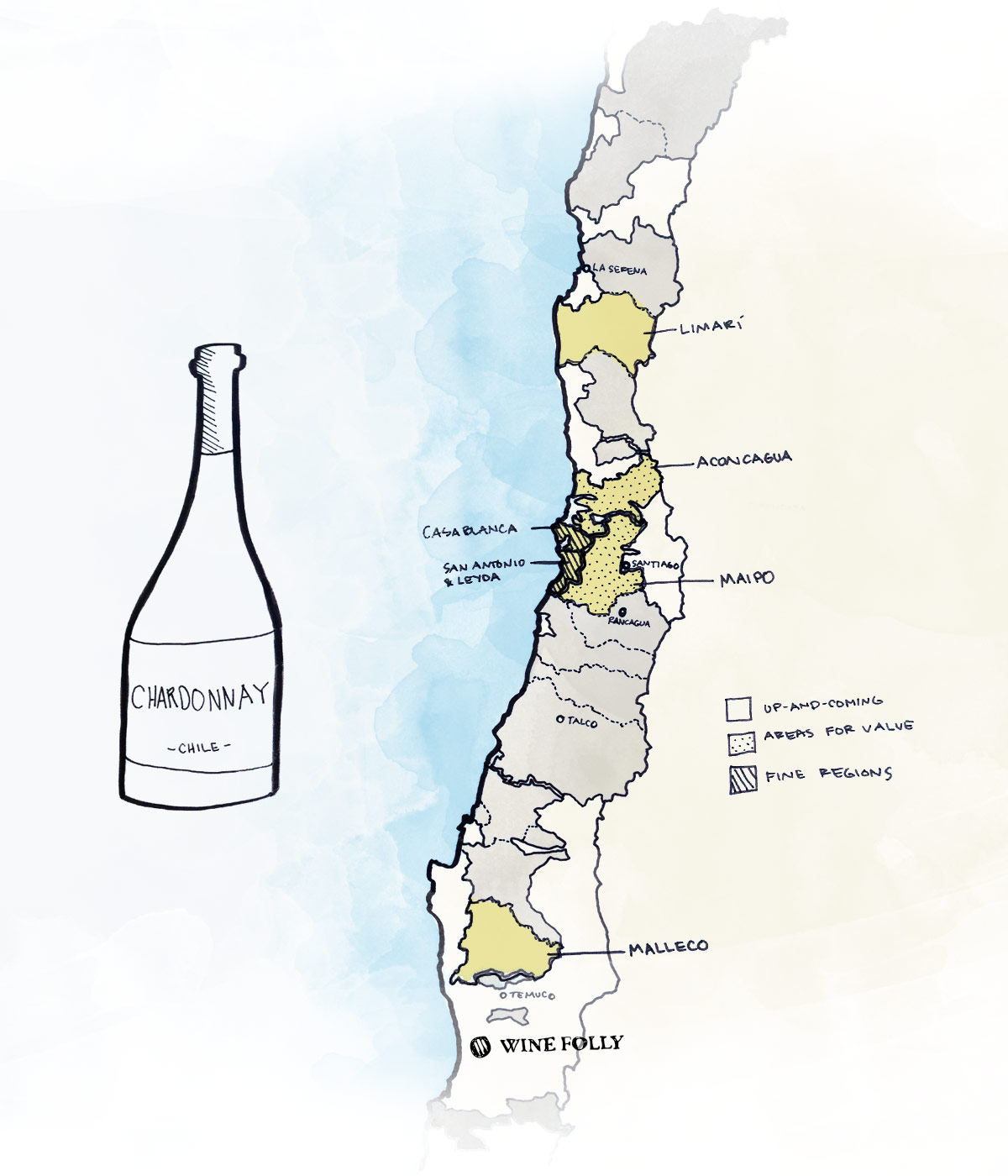 Chardonnay
Chilean Chardonnay delivers the tropical fruit flavors you find in Californian Chardonnay, but Chile’s Pacific coastline and the cool ocean breezes give its wine an added extra burst of acidity. Expect minerally notes of lemon, pineapple, baked peach, and meringue, along with a long, creamy, spiced finish.
Great Value Regions: The larger regions of Maipo and Aconcagua offer great value Chardonnay. Just $11–13 should buy you a bottle that is a charming example of Chilean Chardonnay.
Fine Wine Regions: Spend $17+ and you’ll get into the finer examples of what Chilean Chardonnay has to offer. Within the Aconcagua Valley, there are several sub-appellations including Casablanca Valley, San Antonio Valley, and Leyda Valley. Also, to the North, Limarí Valley has come out with a couple of outstanding examples and in the deeper south, Malleco Valley produces elegant Chardonnay with lean notes of starfruit and minerals.
Vintages to Seek Out: The years 2014, 2013 and 2012, produced outstanding Chardonnay. While 2015 wines may be a little flabby, 2016 has the potential for good quality whites (but not reds). 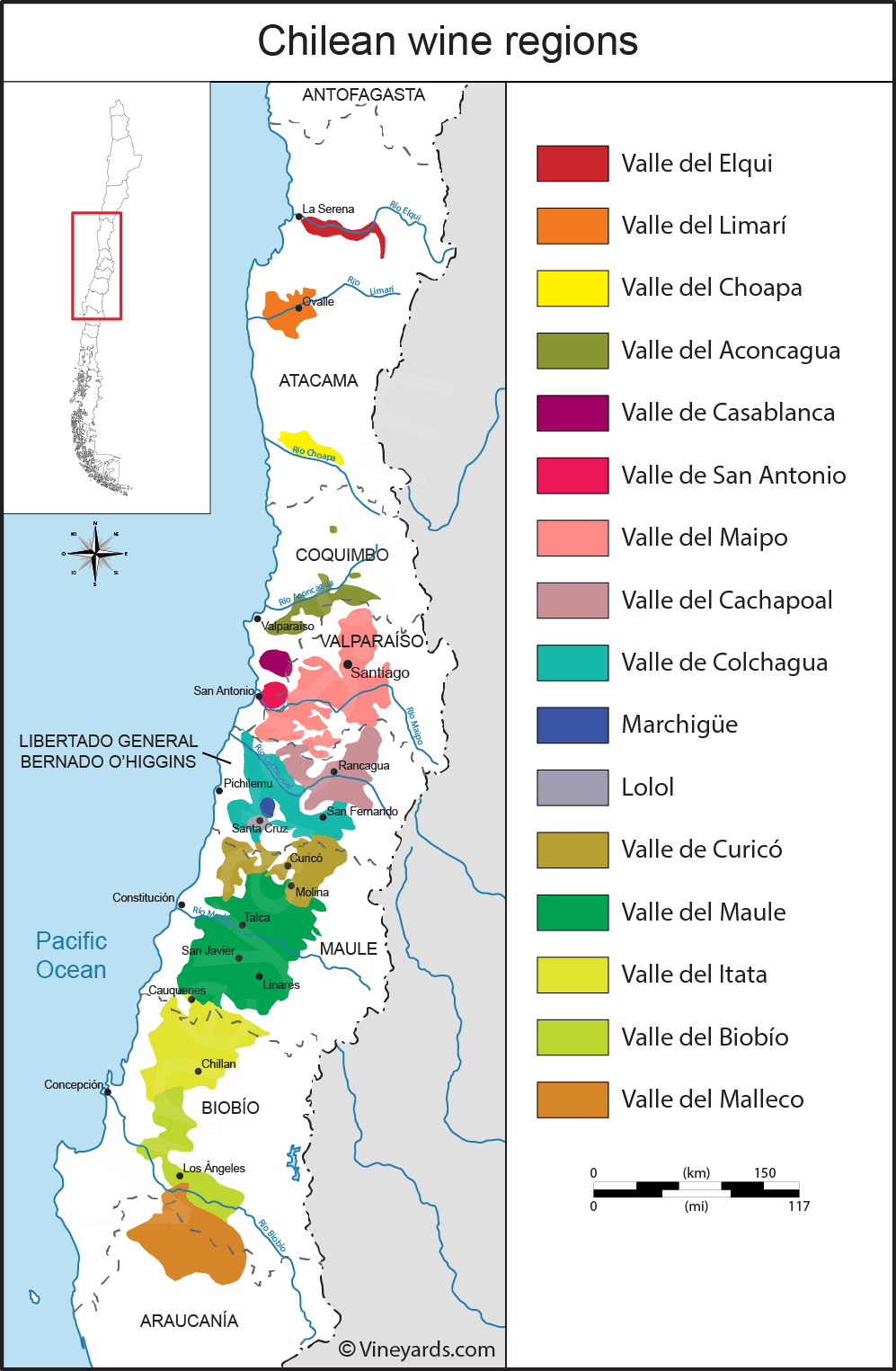 The Wine Regions of Chile
Knowing where to find great Chilean wine has a lot to do with learning the country’s major regions. Take a look at the map to familiarize yourself with Chile’s wine regions.

Wine was brought into Chile first by Spanish Conquistadors in the mid 1500s and the country rapidly grew to fulfill international wine demand. The country's wine production went into disarray until after Chilean Independence. Since then, Chile has begun to re-root itself making a few special discoveries including finding a nearly extinct grape (Carménère) and realizing the potential for elegant, terroir-driven red Bordeaux blends. Chile has wide climatic diversity from north to south but also east to west where cool coastal areas are ideal for wines like Chardonnay and Pinot Noir and inland Andes areas are better for age-worthy red wines like Syrah. 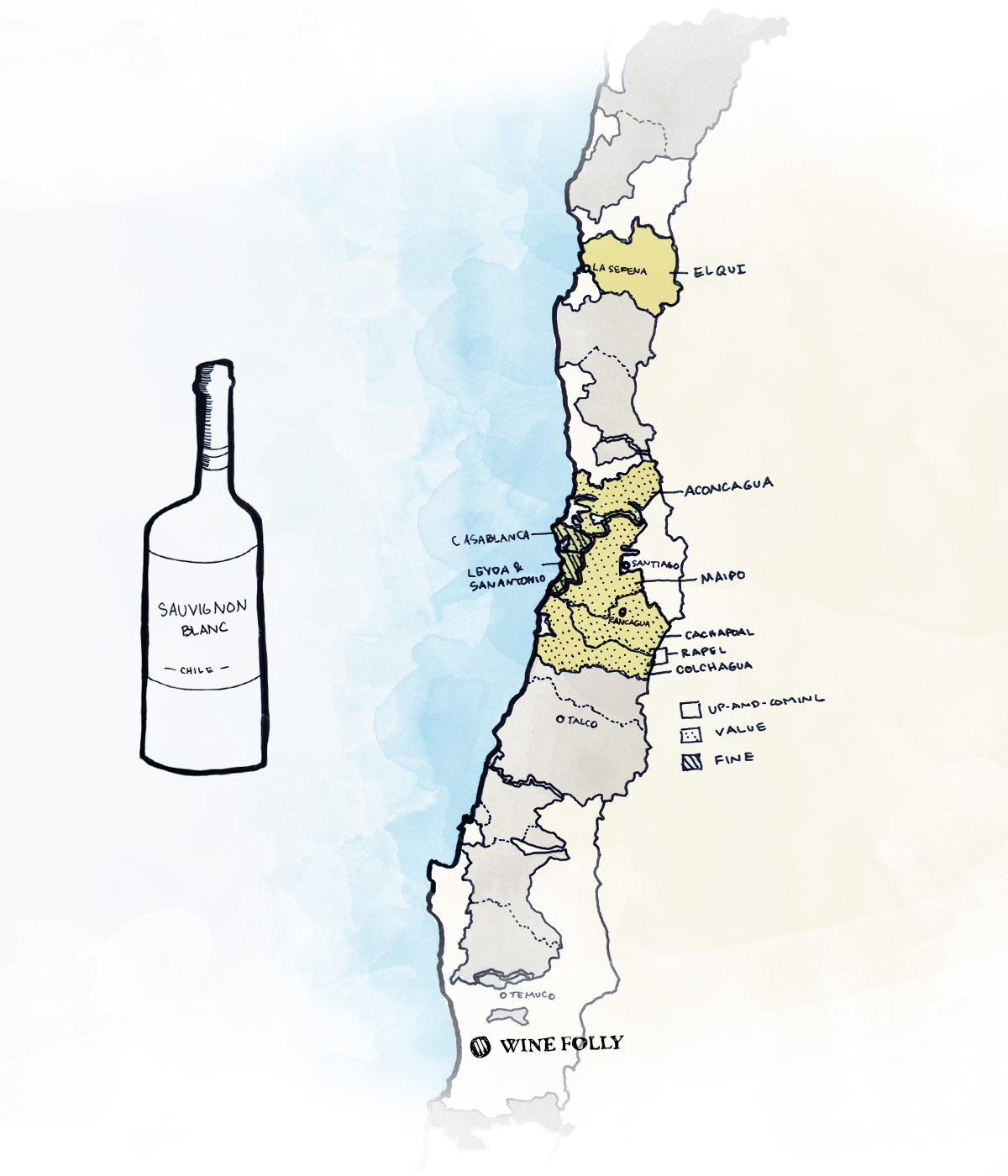 Sauvignon Blanc
Chilean is exactly where to look for awesome value, zesty, minerally Sauvignon Blanc. Even the country’s best Sauvignon Blanc wines are usually under $25. Wines exude lemon-lime, white peach, and grapefruit backed with a long, racy, stony finish. These Sauvignon Blancs will usually echo a riper style of white Bordeaux.
Great Value Regions: Much of the best Chilean Sauvignon Blanc grows alongside Chardonnay in Aconcagua including Casablanca, San Antonio, and Leyda Valleys. You’ll also find some intriguing stuff from Colchagua Valley and, believe it or not, to the far north in Elqui Valley where the vineyards line small, sun-protected steep valleys.
Vintages to Seek Out: As with Chardonnay, 2014, 2013 and 2012, produced outstanding quality and 2016 also has great potential because white wines were harvested prior to the late-summer rains. 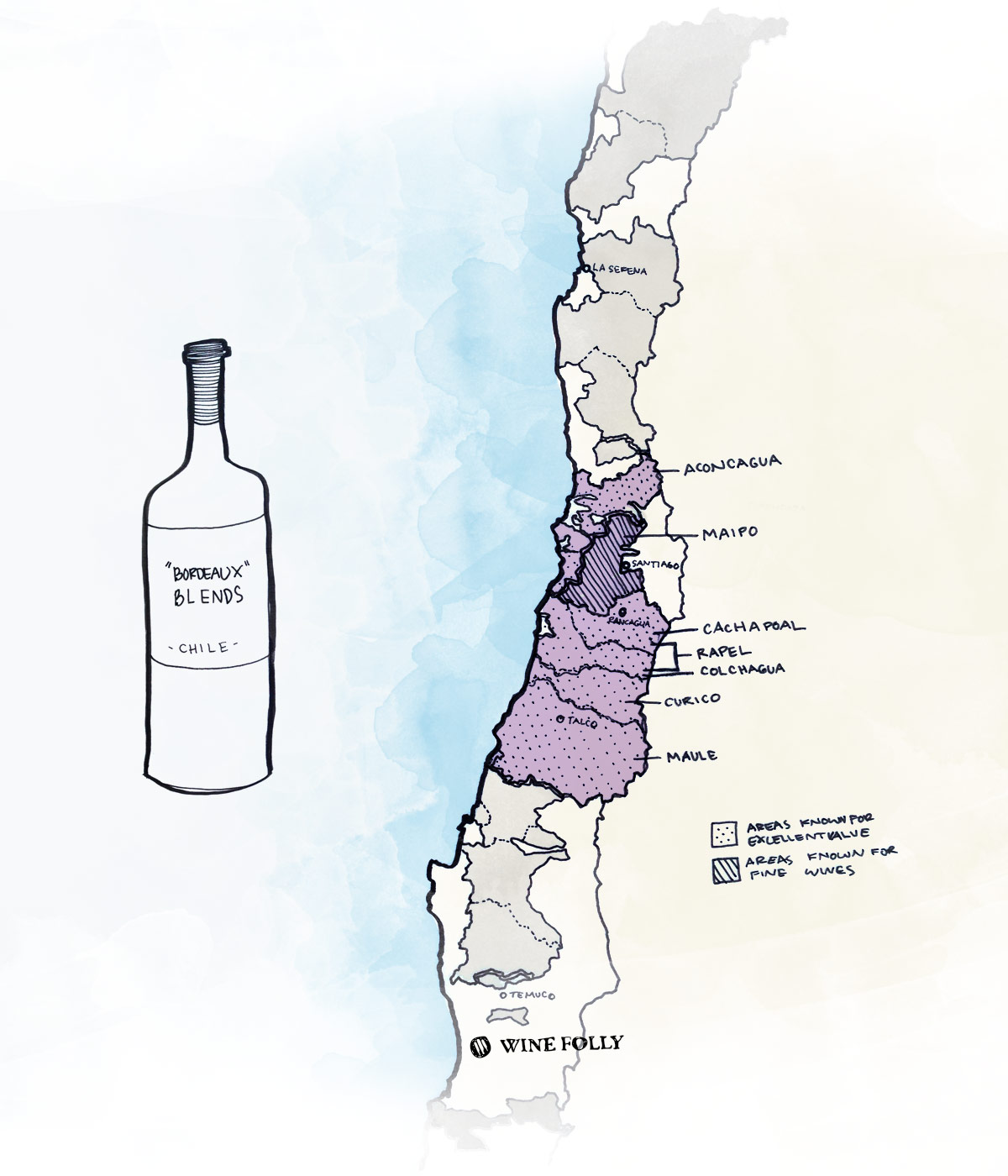 Bordeaux Blends Chilean Style
The grapes of Cabernet Sauvignon, Merlot, Carménère, Petit Verdot, Malbec and sometimes Syrah are blended together to create Chile’s own version of the classic Bordeaux Blend. These blends produce some of the finest wines of Chile and you’ll often see them labeled with a made up name (such as Auma, Alpha M, Don Maximiano, Aluvion, etc.). Because of the wide range of potential blending varieties, the flavors range a bit, but the general taste profile offers up rich flavors of plum and dried blackberry or raspberry, with savory accents of olives and pepper, as well as a mineral-tinged, smoky finish.
Great Value Regions: The Central Valley offers exceptional values for the Bordeaux blend. Of course, you can find excellent values from Maipo and Rapel Valleys if you keep your eyes peeled
Fine Wine Regions: Maipo has shown to be the place to look for Cabernet Sauvignon but there are some excellent producers now coming from Los Lingues in Alto Colchagua and Aconcagua offering equally stunning wines.
Vintages to Seek Out: The years 2009 and 2011–2014 all produced excellent quality reds, particularly 2009, 2011 and 2013. However 2015 was a hot year, so you might find these to be slightly more tannic.
Chile is Phylloxera Free
Nearly all of Chile’s vineyards are planted on their own rootstock, a feat which very few regions can attest to due to the near-worldwide infestation of the vine mite called phylloxera. 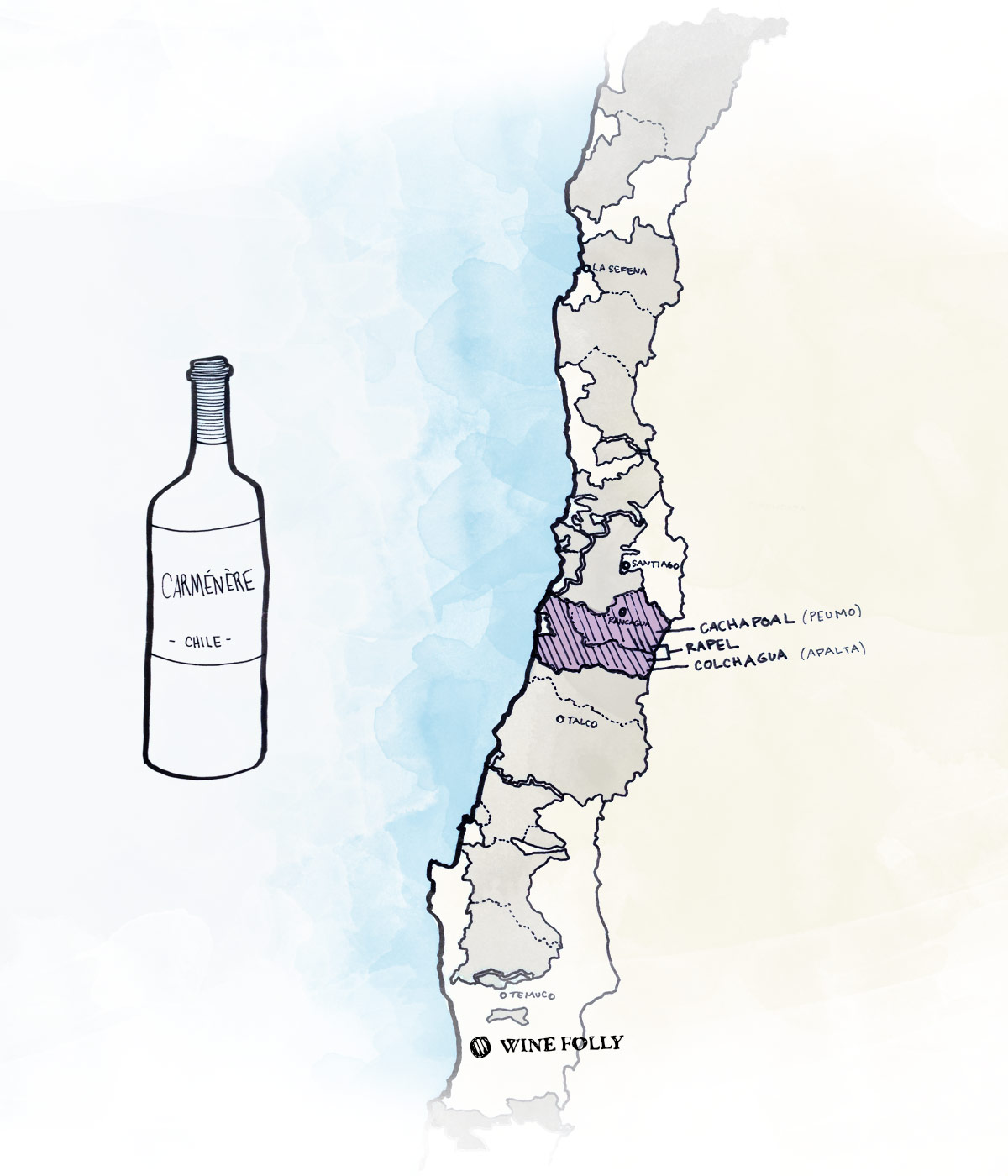 Carménère
At first, Carménère was thought to be Merlot when it was first transplanted into Chile. Thankfully, this little mistake is likely what saved Carménère from extinction. Carménère has a similar profile to a light-bodied, juicy style of Merlot with plum and black cherry fruit along with mild tannin. What makes it different than Merlot is Carménère’s high prevalence of an aroma compound called Pyrazine which gives wine more savory flavors of black pepper, bell pepper, and cocoa powder. This is an absolutely fabulous food wine and one of Chile’s treasured grapes.
Great Value Regions: The Central Valley of Chile grows the majority of Chilean Carménère and many high-value wines have Rapel, Cachapoal, or Colchagua Valley on the label. Be sure to seek out great vintages for exceptional quality in the value category.
Fine Wine Regions: The finer examples of Carménère have been found in tiny areas within the larger Rapel Valley area including Peumo in Cachapoal and Apalta in Colchagua. Keep your eyes open for these sub-appellations.
Vintages to Seek Out: The years 2009 and 2011–2014 all produced excellent quality reds, particularly 2009, 2011 and 2013. However 2015 was a hot year, so you might find these to be slightly more tannic. 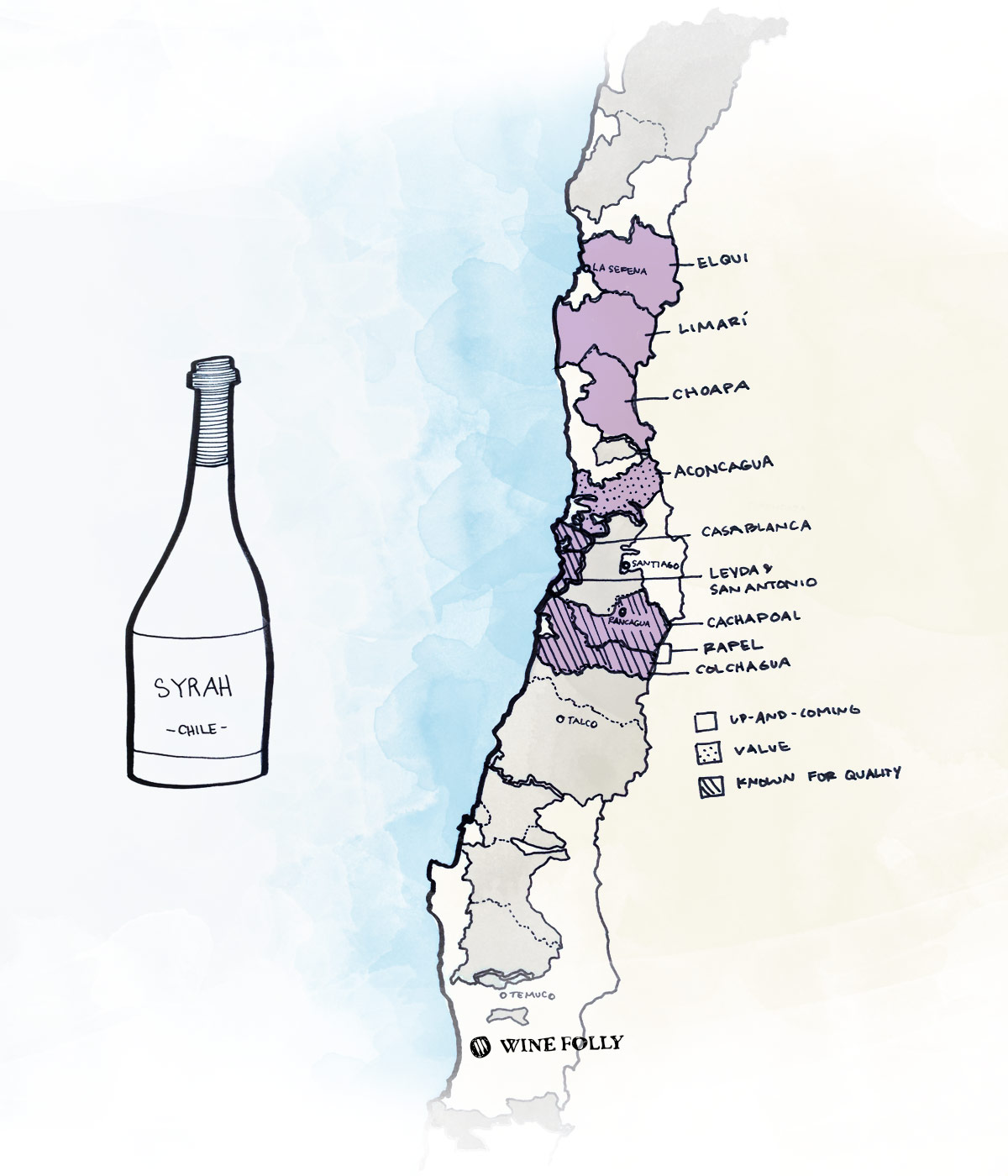 Syrah
Syrah is an important grape in Chile and is only just starting to make waves in the wine community. These wines are distinctly more elegant (cool climate) in style and consistently offer up spiced meaty notes along with red or black plummy fruit. Tannins can be bolder in Chilean Syrah, which is one of the reasons this wine has become so intriguing as of late; it also has the potential to age very well.
Regions of Interest: Within the Central Valley, the region of Rapel Valley (which includes both Cachapoal and Colchagua Valleys) has consistently shown some of the finest examples of Syrah from Chile. Beyond this, you’ll find Syrah also grows alongside Chardonnay and produces several lush and plump examples from Casablanca and Leyda Valleys (in Aconcagua). Some of the best values are found in the extreme wine growing regions including Elqui, Limarí, and the Choapa Valley (in Coquimbo).
Vintages to Seek Out: The years 2009 and 2011–2014 all produced excellent quality reds, particularly 2009, 2011 and 2013. However 2015 was a hot year, so you might find these to be slightly more herbaceous and tannic. 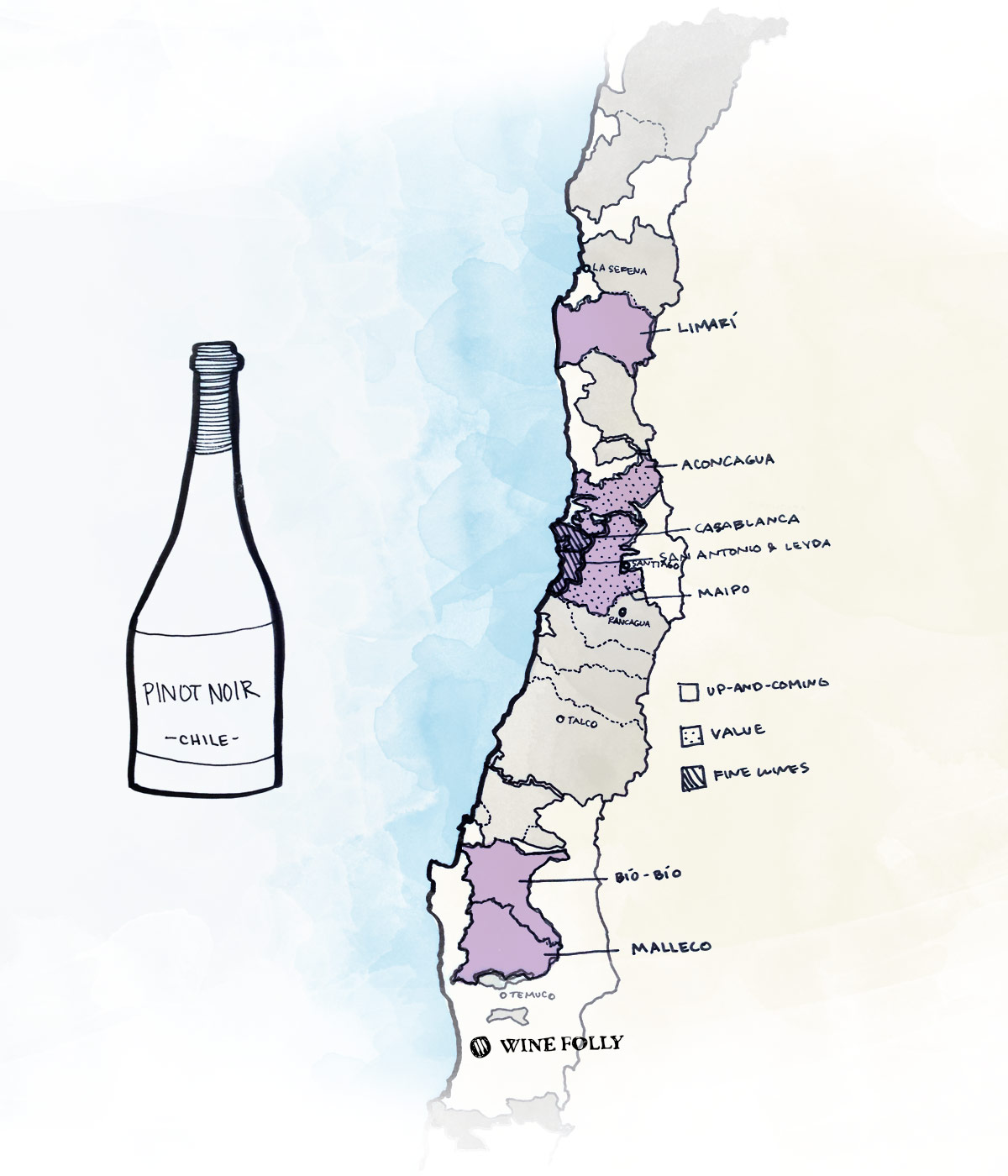 Pinot Noir
If you love Pinot, then you likely already know about the great-value varietals coming from Chile. Chilean Pinot Noir offers plush flavors of black cherry, plums, subtle allspice (sometimes verging on beef bouillon), and floral aromas of bergamot, with a creamy, spiced finish. Pinot Noir from Chile is often round and smooth with low tannin.
Regions of Interest: They say everywhere where Chardonnay grows also makes great Pinot Noir, and Chile is no exception. The best regions tend to be towards the coast in the Aconcagua region including Casablanca, San Antonio, and the Leyda Valley. Still, there are some intriguing finds from Limarí Valley in Coquimbo, Bío-Bio, and the Malleco Valley in the South Region that are more delicate and floral; for a Pinot fanatic, these up-and-coming regions are definitely worth a try.
Vintages: The years 2009 and 2011–2014 all produced excellent quality reds, particularly 2009, 2011 and 2013.

Last Word: Up-and-Coming Wines of Chile
Outside the popular varieties there are 2 up-and-coming varieties from Chile that the explorative wine lovers will definitely want to know about:
·         País (Listan Prieto): Many of the oldest vines in the Central Valley of Chile are dedicated to the País grape (aka Listan Prieto) which is a Spanish Islands grape variety producing wonderfully punchy, very light-in-color, red-fruit driven wines. Given Chile’s herbaceous terroir, these wines often have a touch of meaty spice to their taste along with sweet fruit.
·         Carignan: In the Central Valley of Chile, a group of vintners started a project called VIGNO to protect and champion the amazing old vines of Carignan. These vineyards are mostly dry farmed and produce fruity Carignan with notes of raspberry and roasted plum with a touch of graphite-like minerality. Look for VIGNO on the label to find one of these wines.